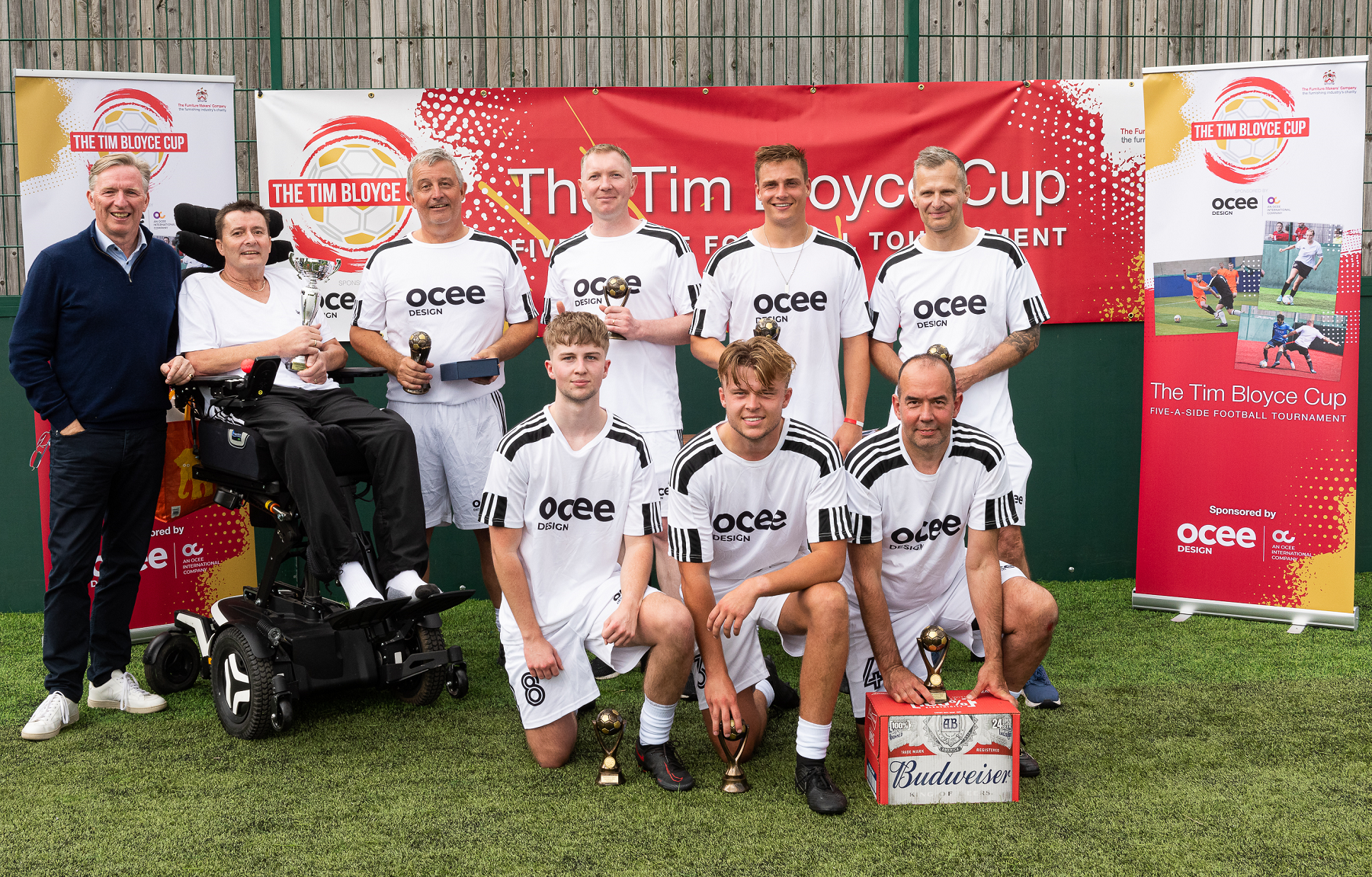 The one-day competition, which was generously sponsored by Ocee Design, took place at the Lucozade Powerleague Football Centre, Coventry on Sunday 3 July 2022.

Now in its eighth year, the tournament was renamed the Tim Bloyce Cup in 2022 to honour Tim Bloyce, a life-long football fan and employee of Ocee Design, who was diagnosed with Motor Neurone Disease (MND) in 2021.

The event was on par with the biggest ever held, as 15 teams from furnishing retailers, manufacturers, distributors and service providers, including Celtheath, the Furniture and Home Improvement Ombudsman (FHIO), Hafele, Headlam, Hypnos, JPA Workspaces, Lee Longlands, Ocee Design and Whitemeadow, were all competing to topple returning champions Axminster Tools.

The action kicked off at 1.00pm with the all-important group stages, during which each squad played three games to secure their place in the next round. The games were fast, very competitive and goal heavy with each team leaving everything on the field in the hope of making it to the next stage. FC Hypnos looked unstoppable in the early stages of the tournament, scoring 40 goals in their first three games and only conceding six.

At the end of the group stage, the top eight teams progressed to the main competition’s knockout stage, while the top four teams from the bottom seven competed for the silver plate.

After an hour of play in the warm July sun, Ocee United and FC Hypnos had beaten off the rest of the competition to claim their spots in the final. With FC Hypnos having already bested Ocee United 9:4 in the group stages, the bed manufacturer’s team had to be confident going into the match. However, with friends, family and their colleague, Tim Bloyce, cheering on from the side lines, Ocee United were determined not to let their earlier loss psyche them out of bringing home the trophy. Both teams gave everything they had in a hard-fought final but when the final whistle was blown, Ocee United was victorious 5:4.

The event finished with a presentation for the winners, which was followed by a barbeque. In addition to Ocee United collecting their prizes, FHIO was presented with the silver plate after beating Hafele in the final. The player of the tournament was Stefan Mason of Ocee United.

Jonny Westbrooke, CEO of The Furniture Makers’ Company, said: “Over the past decade, the five-a-side football tournament has become a much-loved and very competitive staple in our calendar of fundraising events. After two years of inactivity, we were delighted to resume the event under a new banner and identity of the Tim Bloyce Cup. Thank you to Ocee Design for not only sponsoring the tournament but the support they provided in the planning and build-up to the day.”

Neil Clark, sales director at Ocee Design and team captain of Ocee United, said: “Both Ocee Design teams and our supporters had a very enjoyable afternoon at the Tim Bloyce Cup. It was very well organised. The first game started at 1pm and all the group games, semi-finals and finals were finished by 5pm. The refreshments package was well received. Thank you to everyone involved.”

Richard Griffin, membership director at the Furniture and Home Improvement Ombudsman, said: “FHIO decided to enter this year’s Tim Bloyce Cup for the first time. We had a brilliant day. It was fantastic to part of an event so well supported and attended by the industry. The day was well organised and the games played out in good spirit, with a competitive edge of course. We capped the day off with a BBQ and some drinks with our teammates. We’re looking forward to coming back next year!”

Rob Forsdike, group customer service manager at Lee Longlands, said: “It was a pleasure to play at the Furniture Makers football tournament once again, representing Lee Longlands. We have certainly missed the event the past two years, with it being cancelled due to COVID.”