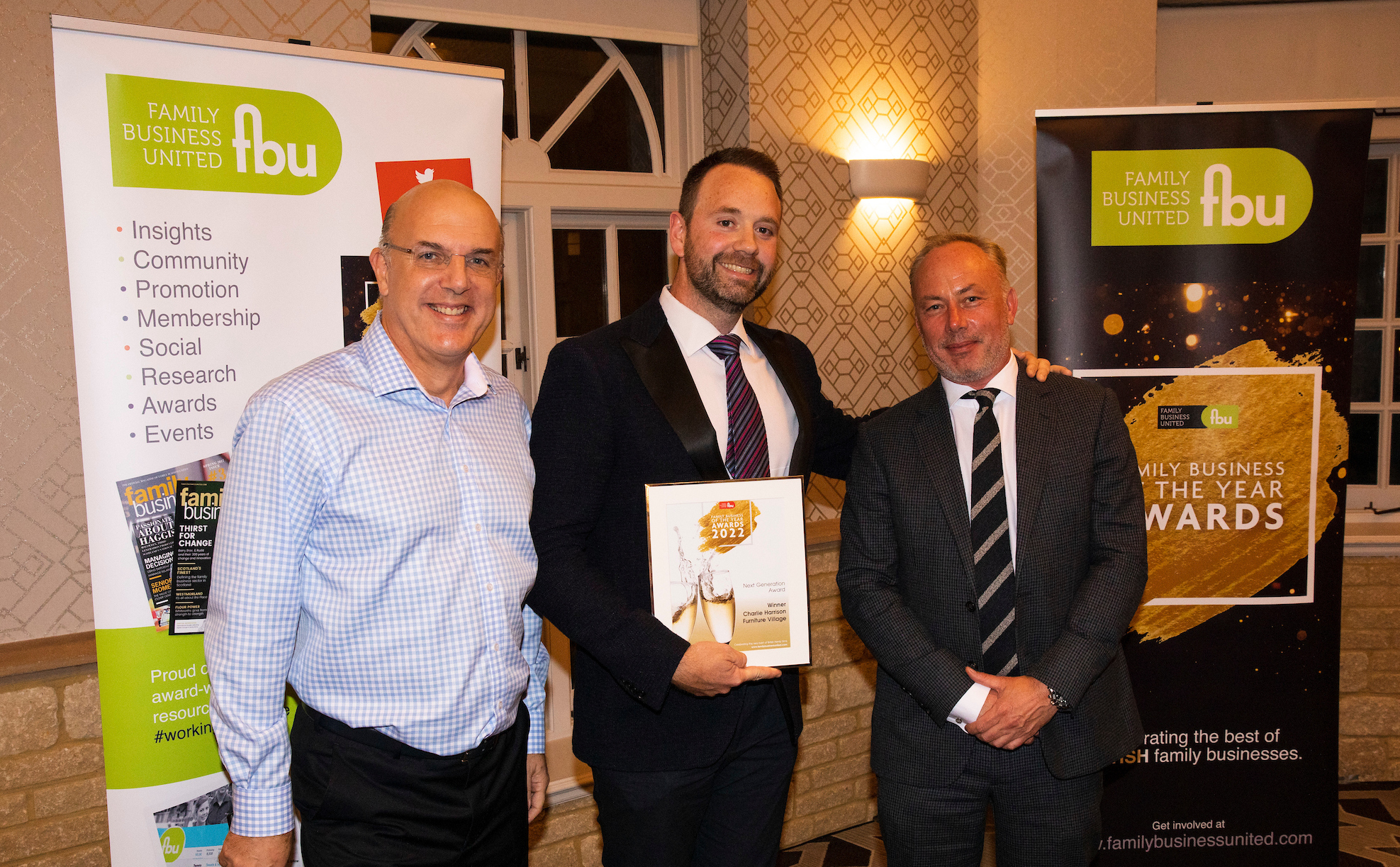 Furniture Village’s Commercial Director, Charlie Harrison has been presented with a Next Generation Award by Family Business United. The award recognises members of the next generation who have made significant contributions to their own family business.

Shortlisted among eight other future family business leaders, Charlie’s drive, passion and commitment was recognised as ‘outstanding’ by a panel of expert judges, who made the announcement at the Family Business Dinner in Pennyhill Park Hotel.

Charlie’s career at Furniture Village spans more than 20 years and has seen him work his way up through the business from a warehouse in Croydon, where he took a Saturday job aged 16, through to the board room, where he sits today as Commercial Director. His father and Chief Executive, Peter Harrison, founded the business in 1989.

Charlie Harrison, Commercial Director at Furniture Village, said: “This year marks my 20th anniversary at Furniture Village. Working alongside my father, day in day out for the past 20 years has been one of the greatest privileges of my life. I’ve learned from the best. It’s an honour to steer the business into the next generation, doing right by our customers, our suppliers, our partners and our planet. It’s been a phenomenal ride, here’s to the next 20!”

Over the years Charlie has played an instrumental role, from launching the retailer’s first transactional website in 2010, which now turns over more than £50m, to initiating the development of a new sales app that offers customers a seamless omni-channel experience. Colleagues and suppliers alike also commend Charlie for his diligent work behind the scenes to bring teams together and champion new ways of working that bring out the very best in those involved.

Family Business United’s Managing Director Paul Andrews comments: “It’s an absolute honour to present Charlie with the Next Generation Award. Family businesses would not exist if it were not for the underlying involvement of families and individuals within these businesses, notably the next generation as they step up to take on various roles as the business and the family look to the future.

“Charlie’s commitment to Furniture Village over the last 20 years has been quite honestly outstanding and it’s clear that he’s played an enormous role in both the success and growth of the business and will continue to do so in the years to come.

“The feedback from his colleagues and suppliers spoke of a man who is not only great at what he does, but someone who is valued for his integrity, kindness and family spirit   – all the makings of a future leader.”

“This was a tough category for the judges with some great next generation family members in the mix.  Charlie stood out to the judges overall and given the contribution he has already made was a worthy recipient of this award.  We look forward to seeing the next stages of his, and the Furniture Village journey.”

Charlie added: “Having my own family has brought a new dimension to my work and given me a greater insight into my own father’s life and the sacrifices he made to grow the business to what it is today. Fatherhood gives me an even deeper respect for the unique bonds that tie a family business together. It’s my hope that my two daughters, Isla and Isabella and my other nephews and nieces will work in the business one day, carrying the torch for future generations.”